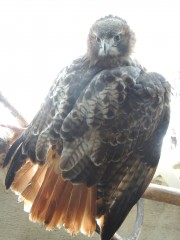 This is an adult red-tailed hawk with rusty red tail and dark eyes.

So…………raptors are a group of birds that hunt and kill their prey.  (Except for turkey vultures; they almost never catch and kill their own food –  carcasses are their preferred food.)  To make it more confusing, there are actually many other birds that are not generally considered to be raptors, that hunt and kill their prey.  Examples of this are:  kingfishers, herons, shrikes, and loons.  Hmmm……. It is, however, fun to work at identifying some of these birds that soar the open sky, dart through the woods in agile flight, dive on their prey, and fly through he night sky on silent wings.  Let’s start by looking at some of the common birds that fit these categories.

The group of hawks called buteos have broad, wide wings and often soar in the open sky.  This group includes red-tailed hawks, broad-winged hawks, rough-legged hawks, and red-shouldered hawks.  You are most likely to see the red-tailed hawk, as it often perches near major roadways when resting.  Although they will drop down on a mouse at times, most of their actual hunting is done in the early light of dawn, and is accomplished by soaring over fields in a grid pattern until they drop down on their prey.

It seems like they would be easy to recognize with that beautiful rusty red tail.  But as a juvenile, their tail is brown with darker stripes across the tail.  The overall brown mottled look of a juvenile red-tailed hawk is similar to many other juvenile colorations.

This is an adult red-tailed hawk with rusty red tail and dark eyes. 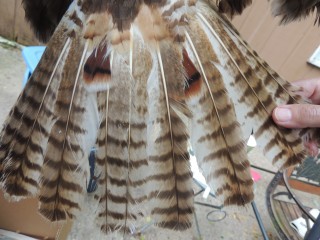 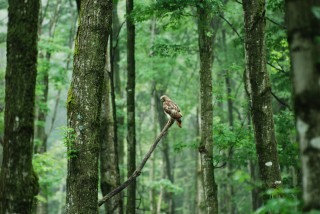 Often, you will see red-tailed hawks on the edge of the woods. They blend in when their back is turned to us. 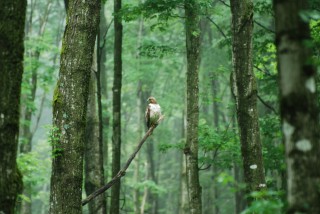 This red-tailed hawk has its belly puffed out and is very noticeable. 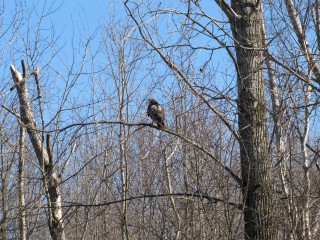 Although this red-tailed hawk is a mature bird with rusty red tail, he blends in well with branches.

Broad-winged Hawks  These hawks are common throughout North America, but not often seen.  They are secretive and nondescript, unless in flight.  In flight, their beautiful white banded tail shows up in the sun, and the undersides of their wings are bright white against a blue sky. 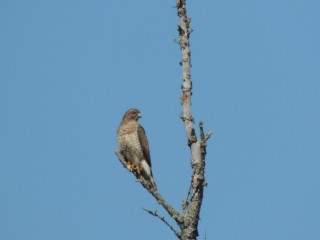 Broad-winged Hawks are secretive, but will perch in the open in wetlands. 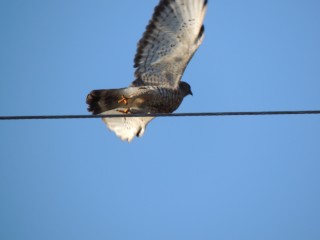 Note the white underside of this Broad-winged Hawk. 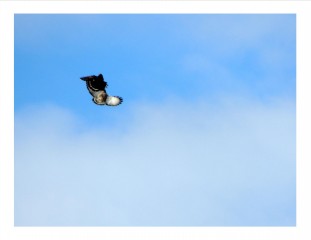 These two broad-winged hawks put on a beautiful display of courtship during one of our trips through the Upper Peninsula. Thank you volunteer, Mallory DeLapp for catching it in photos.

Rough-legged Hawks Rough-legged Hawks move through Michigan in late fall and early spring.  They are fun to watch for, as they are one of the few raptors that can hover.  Look for them in open fields and near farms. 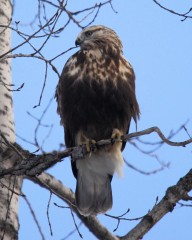 Rough-legged Hawks often perch on branches smaller than would a red-tailed hawk. The rough-legged hawk has smaller feet! 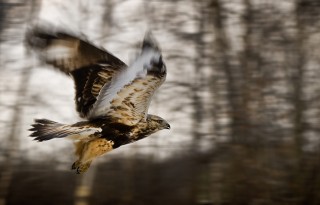 Rough-legged hawks in flight are often mistaken for immature bald eagles because of their mottled color. Photo by Paige Calamari