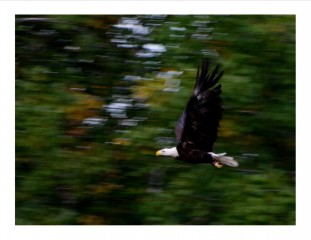 This adult bald eagle was found injured at the Chippewa Nature Center in Midland. The above photo shows her just after she was released. You can see the video of this event in our video section in this web site.

Our goal in rehabilitation is to return a bird to its natural habitat after it has healed completely, with excellent feather condition and all its wildness intact.  It must have acute awareness,  intense concentration, and be able to sense danger from enemies, including humans.  As much as we would like to think that humans would never hurt a hawk or owl, it is not the case.  Most injuries to wild birds of prey are caused by humans; some of these injuries are intentional, and some are not.  To be alert and wary of humans is to be safe.

Young birds, nestlings and juveniles, must develop hunting skills before release; adult birds and young alike must rebuild flight muscles and recover agility skills in order to be able to catch their prey after release.  To blend in with the habitat after release, and resume a normal life as a wild bird is our goal for these amazing creatures. 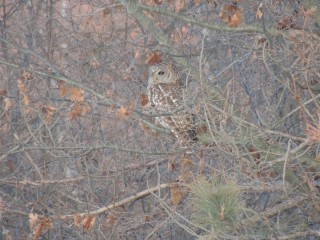 Oscar, a barred owl with a severe head injury – recovered well, and blends into the forest immediately after release.